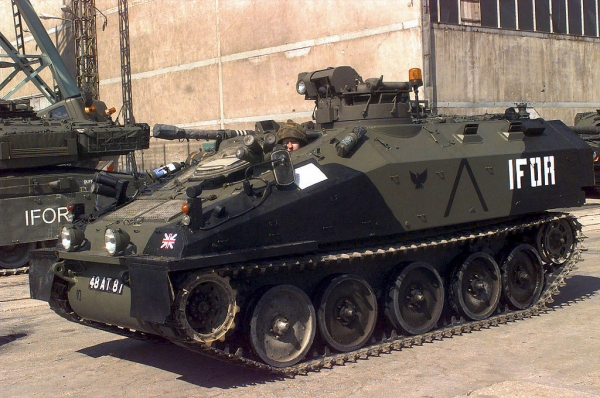 We have a small lot of these famous tanks inbound this year we are taking a pre order list .

The FV103 Spartan was developed during the 1970s as the Armoured Personnel Carrier (APC) version of the British Army’s Combat Vehicle Reconnaissance (Tracked) (CVR(T)) family of armoured fighting vehicles, designed by Alvis plc. The vehicle entered service with the British military in 1978.[2] The Spartan is similar in appearance to the FV102 Striker, except for the missile launcher on the Striker.

The Spartan was powered by a 4.2 xk jaguar petrol engine. The vehicle is 5.16 metres (16.9 ft) in length and 2.48 metres (8 ft 2 in) in width. With a ground clearance of 0.33 metres (1 ft 1 in), it has a height of 2.63 metres (8 ft 8 in).As the APC variant of the CVR(T) family, the FV103 has been used by small specialized groups such as mortar fire controller teams, anti aircraft teams and also reconnaissance teams. The vehicle can carry seven personnel, in a combination of three crew members and four passengers or two crew members and five passengers. It is armed with one 7.62 mm L37A1 machine gun, and can have four smoke dischargers on each side. In addition to the APC role, it has also been used as a resupply vehicle for the FV102 Striker, carrying extra Swingfire missiles.The FV103 has combat weight of 10,670 kilograms (23,520 lb). It can achieve a maximum speed of 96 kilometres per hour (60 mph) and has a range of 510 kilometres (320 mi). It is capable of negotiating up to 60% gradients.